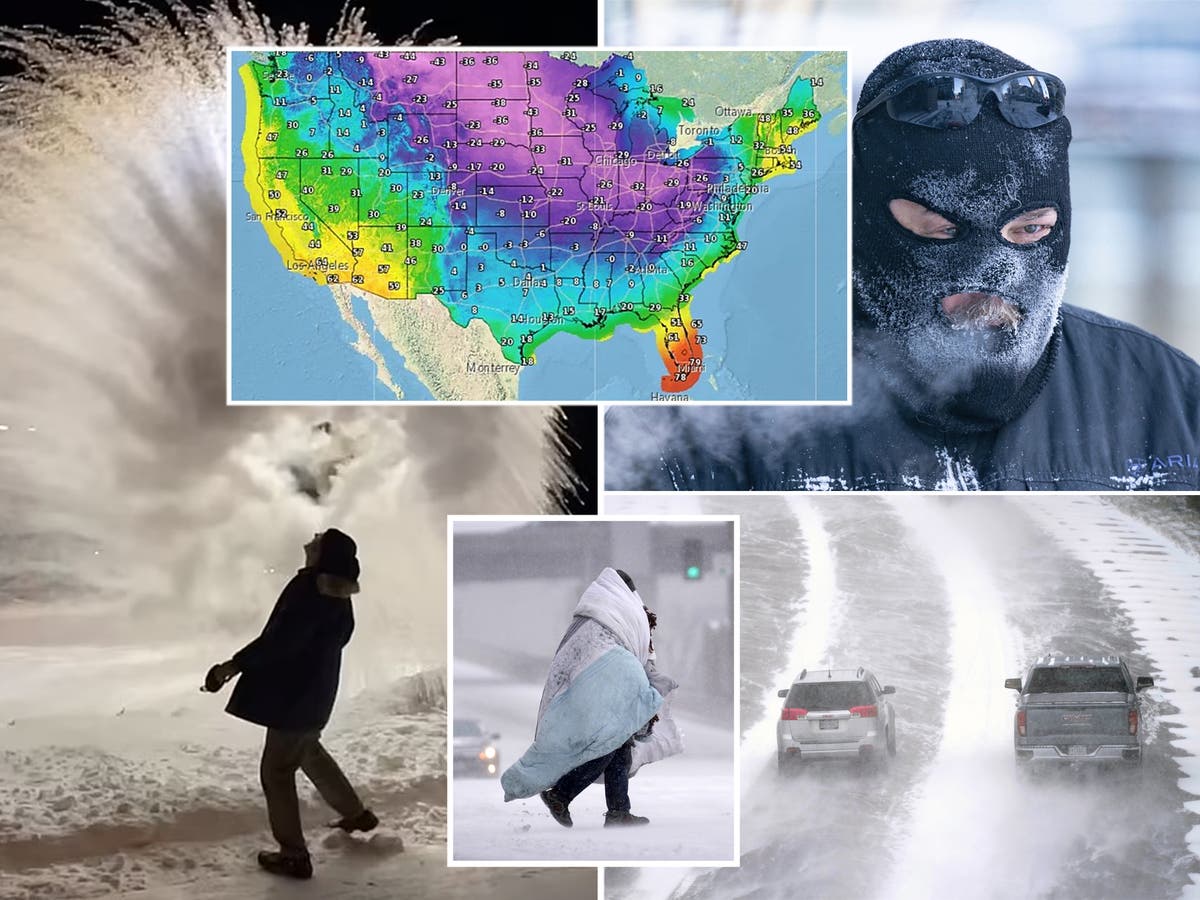 Get our free Climate email

At least eight people have been killed, more than 1.1 million customers are without power, and thousands of flights have been canceled or delayed as a historic polar vortex swept the United States this holiday season.

“Once-in-a-generation” Winter Storm Elliott is causing disruptions across the map with 60 percent of Americans under winter weather warnings or advisories on Friday.

Blizzards, whiteouts, icy rain and freezing, powerful winds stretched from the Canadian border south to the Rio Grande, Gulf Coast and central Florida, and from the Pacific Northwest to the Eastern Seaboard. Wind chill is driving temperatures to minus 40 degrees in some parts of western states.

An estimated 10,000 flights have been delayed or canceled on Friday. Airports in the major transit hubs of New York, Chicago and Denver were reporting major cancellations.

President Joe Biden warned everyone to take the storm seriously.

“This is not like a snow day when you were a kid. This is serious stuff,” he said.

The wild winter weather sweeping the country has included massive bouts of storm surge in Rhode Island, Maine, and Massachusetts.

Here are some of the most striking videos of what’s happening on the ground.

ICYMI: One dead after massive 50-car pileup on Ohio turnpike

One person was killed and several others injured in a huge 50-vehicle crash Ohioaccording to officials.

The Ohio State Highway Patrol says that the crash happened in the eastbound lanes of the Ohio Turnpike in Sandusky County on Friday morning.

Officials say that buses were used to collect and take people from the scene of the accident to a nearby facility to keep them warm in freezing temperatures.

No details have been released on the cause of the crash or on the person killed in the accident.

But officials say that the initial crashes began at around 11.45am, with two people injured in a five-car crash.

What is a ‘bomb cyclone’? US facing winter weather warning

An Arctic blast is sweeping the United States, impacting swathes of the country this holiday season with a miserable mix of dangerous cold, blinding snow squalls and flash freezing.

The powerful winter storm will produce widespread, disruptive and potentially crippling impacts across the central and eastern United States between now and Christmas Eve, the National Weather Service warned.

Forecasters are also warning of the potential for a “bomb cyclone” – but what does this mean?

Kentucky has declared a state of emergency amid “really dangerous” cold weather this week.

Governor Andy Beshear warned people that the extremely cold weather forecast for the state could lead to hazardous conditions.

“This is going to be really, really dangerous,” Gov. Beshear told a press conference on Wednesday morning. “After tornadoes and floods, pandemics and multiple ice storms just in these last three years, I don’t want to lose one person to this Arctic front that is coming through.”

Louise Boyle has the story.

Where Winter Storm Elliot will have the biggest impact

Tens of thousands of people are without power and thousands of flights already canceled or delayed as an Arctic blast began to sweep the United States on Thursday.

The powerful winter storm is forecast to hit 30 states from Washington to Florida this holiday season with a miserable mix of dangerous cold, blinding snow squalls and flash freezing.

The impacts will be widespread, disruptive and potentially crippling across the central and eastern US between now and Christmas Day, the National Weather Service (NWS) reported.

Why Winter Storm Elliot is ‘once-in-a-generation’

An Arctic blast will sweep the United States, impacting almost every state this holiday season with a miserable mix of dangerous cold, blinding snow squalls and flash freezing.

The powerful winter storm will produce widespread, disruptive and potentially crippling impacts across the central and eastern United States between now and Christmas Eve, the National Weather Service warned.

The weather system is so large that about 200 million people across 30 states, from Washington to Florida, were under winter storm warnings and advisories today, and some states declared emergencies due to the conditions.

Winter Storm Elliot, by the numbers

Roughly two-thirds of America is under warnings or advisories for Storm Elliott as the historic polar vortex tightens its grip across the country on Friday.

More than 200 million people are facing subzero temperatures – in some places as low as -40C. This will be accompanied by dangerous winds, and blinding, heavy snowfall at a time when many families were planning a return to a somewhat normal festive season after several years of pandemic restrictions and worries.

Blizzards, whiteouts, rapid ice-overs and freezing, powerful winds stretched from the Canadian border south to the Rio Grande, Gulf Coast and central Florida, and from the Pacific Northwest to the Eastern Seaboard. The National Weather Service described it as “one of the greatest extents of winter weather warnings and advisories ever”.

Louise Boyle from out climate team has the details.

The Portland Pickles, a team that competes in the collegiate West Coast League, are warning Oregon residents about the danger of slipping on icy sidewalks.

“Stay safe out there today,” the team wrote on Twitter on Friday, attaching a local news segment featuring their mascot, Dillon, a giant pickle in a baseball uniform, slipping while going for a run on snowy pavement.

Snow storms across the country have knocked out airports.