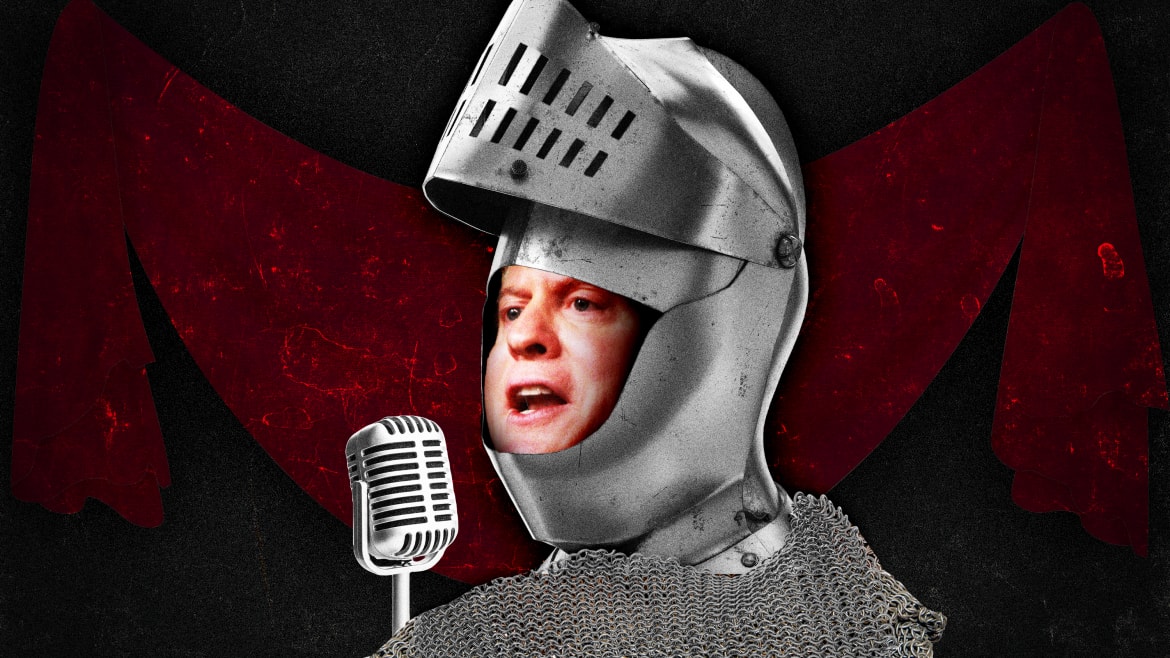 It’s hard to imagine a more devoted supporter of Donald Trump than Las Vegas political commentator Wayne Allyn Root. He described Trump as his “mentor,” and the best president of Root’s lifetime. If Trump had been inaugurated for a second term, Root claims, he would easily have been the greatest president ever. In 2019, Trump angered Jewish groups when he thanked Root for calling him the “King of Israel.”

But Root now claims an honor that even the approval-crazed ex-president has never held: a knighthood. Or, at least, something like it.

Beginning this summer, Root, a former Newsmax TV host, started making appearances on political shows where he was described as “Sir Wayne Allyn Root.” Currently, he is introduced on his own show on the Real America’s Voice digital channel as “Sir Wayne.” When Root appears on other pro-Trump shows, chyrons below his name often list him as “Sir.”

“He just got knighted,” said one podcast host when Root went on his show shortly after his investiture. “He’s Sir Wayne Allyn Root!”

It’s usually not made clear to Root’s audience, though, that Root didn’t receive his “knighthood” from the British crown, or any other regal entity generally known for handing out the honors. Instead, Root’s knighthood comes from a little-known organization called the “Royal House of Cappadocia” that handed out his knighthood at a $1,000-a-ticket casino gala.

On its website, the Royal House of Cappadocia claims to trace its lineage back thousands of years to the Anatolian region of Cappadocia. But its leader, “His Serene Highness” Prince Don Rafael Andújar y Vilches, was born in Spain in 1946 and only established the knightly order that Root belongs to in 2012.

Root’s journey into the chivalric annals culminated in June, when he attended his knighting ceremony at The Venetian resort and casino in Las Vegas. Dubbed “The Royal Knighting Investiture,” the gala featured a roughly minute-long ceremony in which Andújar y Vilches knighted Root, who was dressed in a cape and clutching a sword.

It was apparently a powerful honor for Root, a brash talk radio host who claims to come from origins so humble that he’s an “SOB” — a “Son of a Butcher.”

After the event, talk radio industry publication Talkers claimed that Root “is now a Knight in the Royal Order of Constantine the Great & St. Helen and can forever claim the title ‘Sir Wayne Allyn Root.’”

Root was excited, to put it mildly.

In 2019, Spanish newspaper The World reported that an honor from the Royal House of Cappadocia costs between $1,000 and $2,000. But Root insists his “knighthood” wasn’t contingent on any money changing hands.

“I did not pay to be knighted,” Root wrote in an email to The Daily Beast. “ZERO.”

Instead, Root claims he was knighted to celebrate his business achievements.

It’s impossible to buy your way into the Cappadocian knightly order, a Cappadocia representative who introduced himself as Duke Gerhart Walch wrote in an email to The Daily Beast.

“The Knight or Damehood is bestowed for MERIT and cannot be purchased from the Royal House at any price,” Gerhart told The Daily Beast.

With that said, according to Gerhart, there certainly is money involved in many of the knighthood events. A website for the gala where Root was knighted lists tickets to the “Royal Knighting Investiture” as costing $1,000 per person. Gerhart said would-be knights and dames are “encouraged” to make donations to the group’s nonprofit and “purchase a table to invite his family and friends.”

There are other costs to be covered, too, according to Gerhart, including the “expense of the event,” the new knight’s sword, and “jewels.”

Even if Root’s path into chivalry isn’t exactly what his listeners might think of when they imagine a knight, it’s more harmless than some of his other claims. In 2020, for example, New York’s attorney general sent Root a cease-and-desist warning Root to stop falsely marketing products as coronavirus cures.

Read more at The Daily Beast.

Get the Daily Beast’s biggest scoops and scandals delivered right to your inbox. Sign up now.