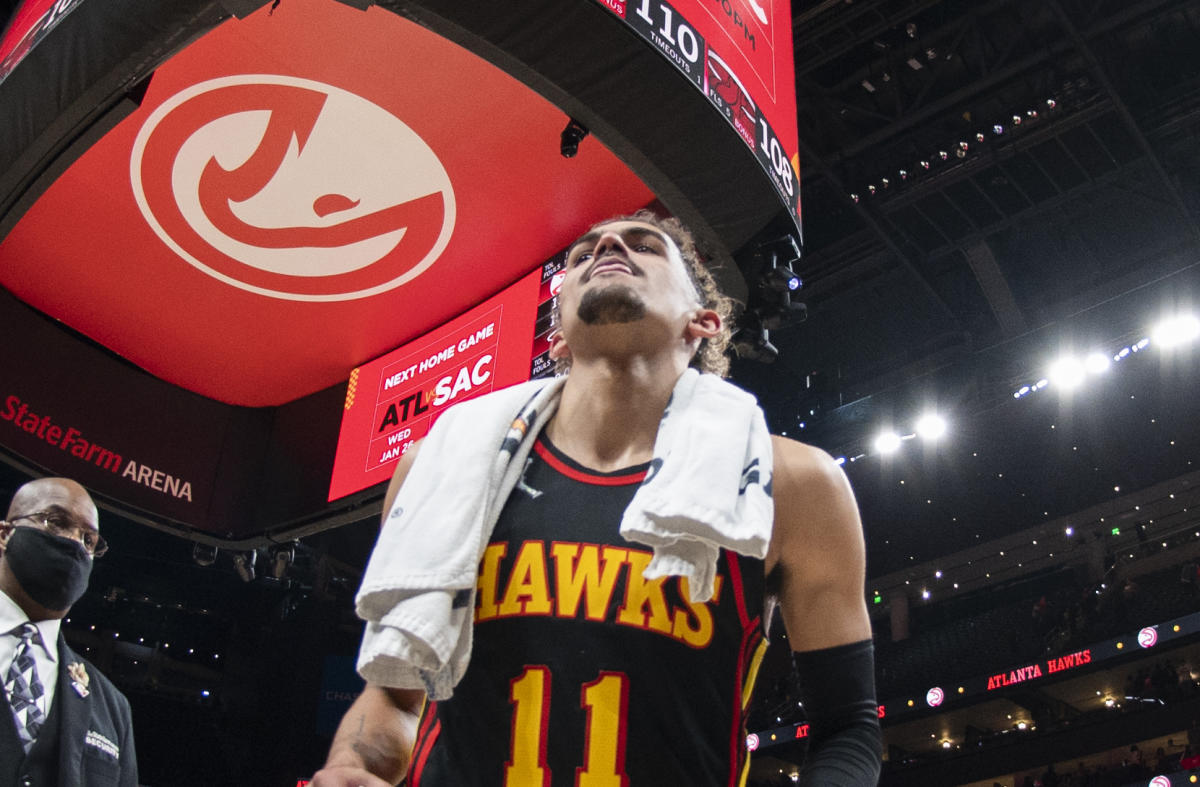 It’s time for another edition of our NBA trade rumor rankings series, where we rank the five players who have appeared most often in trade rumors over the past week, judged by appearances on our page.

We have a few fresh names on the list this week, star names at that, and although all of the recent scuttle indicates this could be a quieter deadline with so many teams believing they have a shot to make a deep playoff run, we’re sure we’ll get a surprise or two out of the trade market.

Below, check out our latest trade rumors ranking.

Cam Reddish checks in at No. 5 this week without having seen action in an NBA game since Dec. 3, a nine-game stretch in which the New York Knicks have gone 8-1, leading us to believe head coach Tom Thibodeau isn’t exactly yearning to get Reddish back in the rotation anytime soon.

Reddish remains just 23 years old and has worlds of talent, so moving him shouldn’t be a problem for New York if it chooses to go that route. Just this weekthe Lakers were mentioned as a potential landing spot for the former Duke standout:

There are people within the organization very intrigued by New York Knicks forward Cam Reddish – a 6-foot-8, 23-year-old wing – who would give the Lakers size on the perimeter, a massive need. He’s also a former lottery pick, the kind of reclamation project the Lakers have had some success with this year with a player like Lonnie Walker IV.

The report would go on to say the Knicks are seeking a protected first-rounder for Reddish, which might be a bit of a steep price for a player who has yet to put it all together on a consistent basis in the NBA.

The Chicago Bulls are dealing with some dysfunction as it pertains to team chemistry and accountability while stationed 11th in the Eastern Conference standings (13-18). If matters don’t improve this season, rivals executives believe it could lead star guard DeMar DeRozan to request to be moved in the offseason, league sources tell Bleacher Report.

The Bulls are loaded with talent but the team is clearly lacking in chemistry, which might have to do with the team’s top two stars, one DeRozan and the other coming up next on our list, having such similar ball-dominant styles of play.

We learned this week that the Bulls had a players-only locker room blowup before a recent game and that Chicago has attempted multiple sitdowns with DeRozan and his star teammate:

The Bulls have held multiple team meetings to try to work out their issues, and that has included one-on-one, face-to-face sitdowns between DeRozan and LaVine, multiple sources with direct knowledge who were granted anonymity because they are unauthorized to speak publicly on the matter have told The Athletic. DeRozan and LaVine have always had a strong mutual respect for each other. Only 10 months ago, over All-Star Weekend in Cleveland, the stars proclaimed themselves as the NBA’s best duo. They maintain a good personal relationship. But their meetings have not led to in-game results so far, with a level of on-court, stylistic tension simply festering throughout the season and being magnified due to the win-loss record.

DeRozan did seem to respond to the trade rumors surrounding his name recently, sharing the following clip from Training Day on social media:

Chicago currently sits 13-18 and 11th in the East so memes aside, this situation could get uglier before it improves.

We arrive at the next Bulls star with scuttle surrounding his name, Zach LaVine.

Our own Michael Scotto reported this week that several teams, including the Knicks, are monitoring the availability of LaVine ahead of the trade deadline:

Just before Chicago executives Arturas Karnisovas and Marc Eversley arrived in Las Vegas for the Showcase, Bulls star Zach LaVine drew the frustration of his teammates during a blowout loss to Minnesota. Several NBA teams, including the New York Knicks, are monitoring whether LaVine will become available on the trade market after Chicago’s underwhelming start to the season at 12-18, Lonzo Ball’s return from injury in question, and Nikola Vucevic’s looming free agency.

That goes with what Shams Charania reported as well this week, that multiple teams are hoping LaVine becomes available.

LaVine spoke it The Athletic directly about the frustration felt by the team trying to right the ship:

“There’s a certain level of frustration in people trying to figure out what we can do to help right the ship,” LaVine told The Athletic. “I think with the players that we have, we try to put it on each other to right the ship. We have those types of guys, those types of mentalities where each of us have been number one options on a team before and then we all come together collectively. I think everybody goes through ups and downs, just like every team does,” LaVine told The Athletic on Tuesday when asked about the matter. “Obviously if we’re not winning games, not everybody’s going to be happy. It’s not going to look as good as it was before. It’s all glitter and show when you’re winning games.

Finally (boy, it’s been a busy week for the Bulls), it was reported this week that the pre-game blowup for Chicago was at least in part regarding LaVine’s defense – or lack thereof:

Donovan confirmed the incident before the Heat game, but also said that he was not in the locker room when it happened, only informed about it afterwards. The genesis of those words being said? The constant defensive breakdowns that had been happening over the previous five games, but specifically taking place in that first half against an undermanned Minnesota squad. While LaVine wasn’t named in the call-out, it was said to be directed at him.

We’ll see what happens with the Bulls, but we don’t envy the mess head coach Billy Donovan has on his hands right now.

Might this turn into a DeRozan-or-LaVine thing for Chicago? Stay tuned to find out.

The other major player named in Haynes’ report was – to the surprise of just about everyone – Trae Youngalthough considering his ongoing issues with the head coach Nate McMillan and the Atlanta Hawks’ struggles this season, maybe we shouldn’t have been so surprised.

Rival executives in attendance at the NBA’s annual G League Winter Showcase are of the belief that Atlanta Hawks star point guard Trae Young could be the next player on a rookie max extension to request a trade if the team doesn’t make inroads come postseason time. Young, 24, is as competitive as they come and has a strong desire to win big in this league. He’s under contract through the 2026-27 season but has an early termination option after the 2025-26 season.

Multiple sources are indicating to Heavy Sports that the relationship between Trae Young and coach Nate McMillan has deteriorated further since a dispute/misunderstanding/spat led to the star guard choosing not to attend a December 2nd game against Denver. “It’s a very toxic situation right now,” said one league executive. “It’s been going on for about a month now, and it looks like it’s getting worse.”

For what it’s worth, Young’s father, Ray, responded to all of the scuttle recently on social media:

At the end of the day, rumors aside, this situation is far more likely headed to a McMillan dismissal than a Young trade, you can be sure of that.

However, there is one Hawks player who could see himself traded before the deadline, and that’s it John Collinswho has continuously popped up in trade rumors for months now.

That goes with what Haynes reported as well, that Collins is available in trade talks.

Despite his talent, it might not come that easy for Atlanta to find a new home for the former Wake Forest Demon Deacon, not with Collins putting up 12.0 points nightly this season, making 21.3 percent of his threes, set to be paid like roughly a Top 50 players next year and potentially under contract through 2025-26.

The Hawks probably should have tried harder to move Collins when his stock was higher in seasons past or opted not to sign him to a huge extension when they had doubts about him to begin with.