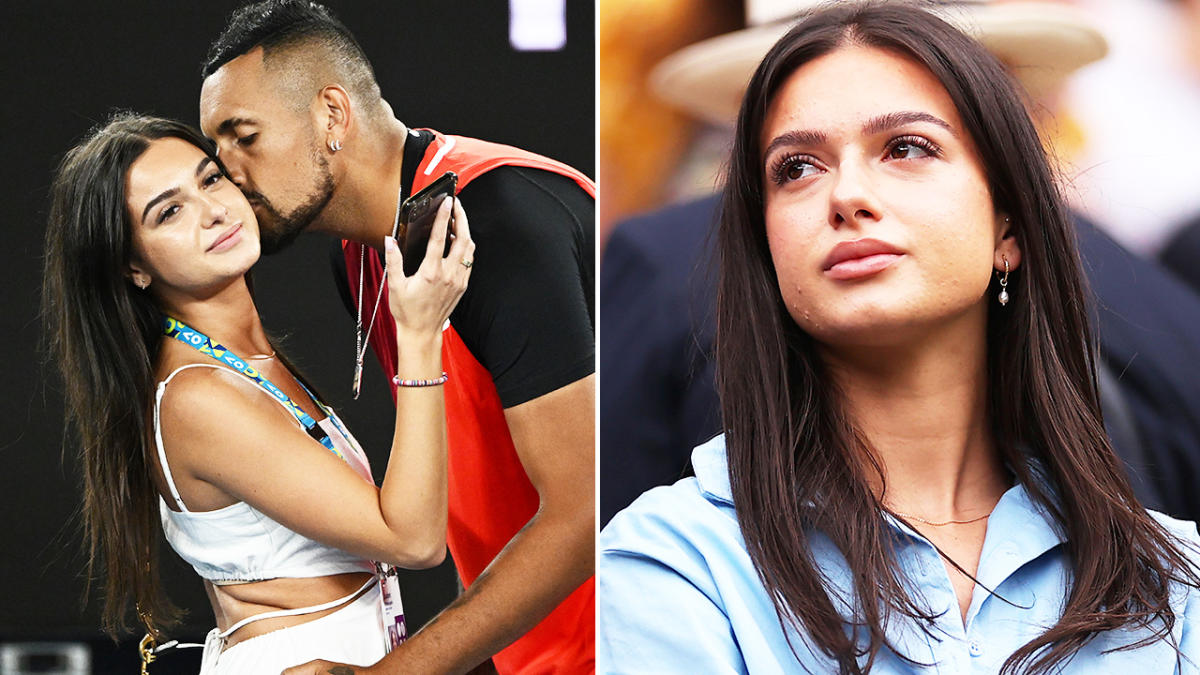 Nick Kyrgios has opened up about his newfound happiness on and off the court, describing it girlfriend Costeen Hatzi as his ‘secret weapon’. The controversial Aussie star enjoyed the best year of his career in 2022, highlighted by an improbable run to the Wimbledon final where he went down to Novak Djokovic.

He also won the Australian Open doubles title and three other titles at the ATP level, compiling the fourth-best win-percentage in singles on the men’s tour (37-10). Only World No.1 Carlos Alcaraz, No.2 Rafa Nadal and No.5 Djokovic had a better strike rate in 2022.

‘NO HE DOESN’T’: Nick Kyrgios’ brutal swipe at Bernard Tomic

Despite it narrowly missing out on the Newcombe Medal and blasting tennis officials as a result, Kyrgios is happier than he’s ever been. When asked on Friday what he puts that down to, the 27-year-old had no hesitation in pointing to his girlfriend.

“None of this could have been done without her,” he told AAP. “It’s been a very successful year, not only on the tennis court but just in general. I’m feeling really, really good about everything and just enjoying life.

“And meeting Costeen was probably my favorite moment, probably the best thing that’s happened to me – and the year I’ve had as a highly motivated and highly pushed player, has been because of her. That’s been my favorite experience.

Asked if he believes Costeen has been his secret weapon, Kyrgios responded: “That’s it, that’s it.”

Kyrgios was left fuming after missing out on the Newcombe Medal, claiming he’d been ‘disrespected’ after the gong went to Ash Barty instead. Many times the snub down to Kyrgios’ refusal to make himself available for the Davis Cupwhich he explained was due to the way he’s been treated in the past by Australian fans.

When asked if he thought perceptions about him had changed in 2022, Kyrgios said: “I don’t really care to be honest. Either way, I know I’ve stayed true to myself … I play the game the way I want to play it.

“And whatever people say, my stadiums are always full. A lot of people have gravitated towards my type of tennis, I’ve been a kind of icon in the sport and, obviously, been able to be consistent in 2022. I guess you could say it was a breakthrough year.”

Kyrgios is a genuine contender to claim the title at the Australian Open in January, however he will have to go through Djokovic and Nadal. According to the World No.22, his real chance will come when Wimbledon rolls around again.

“I’m training well, enjoying it, mentally feeling good. That’s all that really matters,” he said. “Whether I go in there and win the [Australian Open] or lose first round, I’m the same person. I’m taking it day by day, I’m a day-by-day person. I’m not thinking ahead at all.

“Of the four (grand slams) Wimbledon’s always been my first shot to win a slam. It’s still true that it’s my best chance, definitely – it’s the biggest one and the most important one.”

Kyrgios told reporters at the World Tennis League in Dubai this week that he’d love to retire from tennis if he wins a grand slam in 2023. On Thursday he revealed he doesn’t see himself playing past the age of 30.

“I wanted to have a family by then and enjoy family time and enjoy all the hard work I’ve put in,” he said. “So if I have another couple years like this, I think then I would say goodbye. But that’s still two-and-a-half years away, so let’s see.”

Click here to sign up to our newsletter for all the latest and breaking stories from Australia and around the world.