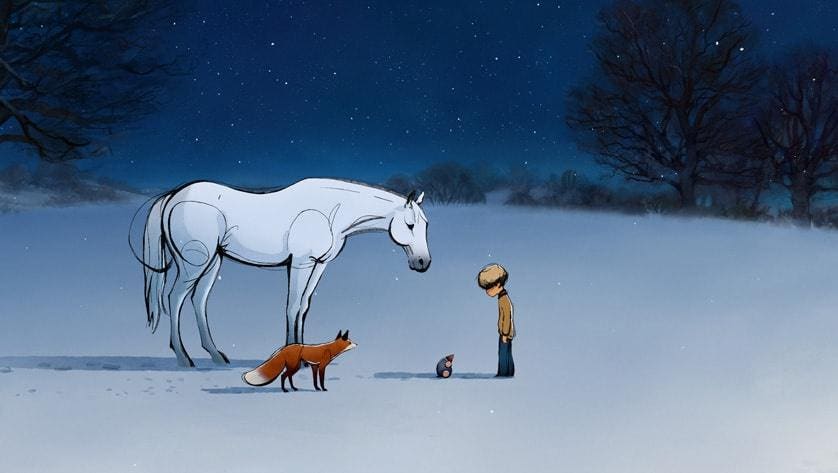 When it comes to depicting disability on screen, Apple TV+ has plenty of overtness. See has blindness. Little Voice has autism. Best Foot Forward has limb differences. All of these shows are obvious, if not entirely relatable to audiences, homages to the disability community. As I’ve written numerous times in this space, it’s these kinds of earnest, genuine representation of disability that are befitting of Apple’s institutional belief that accessibility is a fundamental human right. Nowhere is this commitment more evident than in the company’s newest short film, called The Greatest, released earlier this month coinciding with the International Day of Persons with Disabilities on Saturday, December 3rd.

Charlie Mackesy’s children’s book-turned-animated-film The Boy, The Mole, The Fox, and The Horse keeps the disability train running on the TV+ track, but the effect is far more subtle than its brothers. The film, a tidy 35-minute affair premiering on Christmas Day, follows four friends as they journey to find, as Apple describes it, “the meaning of kindness, courage, and hope.” The film, like the book, is not expressly, or even mostly, about mental health—yet the undertones are strong. The truth is, mental health struggles are every bit as disabling to those who know them more intimately—myself very much included.

The trailer for The Boy, The Mole, The Fox, and The Horse is available on YouTube. Apple announced the film via press release in October. As with all TV+ content, the film supports an inclusive viewing experience with assistive technologies such as closed captioning (CC) and audio descriptions (AD).

“I think general connection is what the book is about: how we really process and how we share life and how we go about communicating,” Mackesy said to me in an interview over videoconference earlier this month ahead of the film’s release. “I suppose when we do that healthily, we get healthy mentally. I feel that, to just say the book is [primarily] about mental health is a mistake. It’s about existence. It’s about being human. It’s about connection and hope and fear and frailty.”

Mackesy, a self-taught painter, said the work on the characters began “about five years ago” when he began drawing sketches of a boy and a mole, followed by a fox and a horse. There was no rhyme or reason to any of the subjects, but Mackesy eventually would post conversations he made up between them to social media. The dynamic that made them interesting was Mackesy created it such that the foursome would have conversations “we don’t normally talk about or [that challenge] the way we ordinarily think,” he said. The boy, for example, would ask the horse existential questions like “What’s the bravest thing you’ve ever done?” The horse replied with one word: “Help.” This exchange caught the attention of therapists and other institutions, who asked Mackesy for permission to use his drawings in sessions, to which he happily agreed. He wants to help people.

Mackesy pushed on with his artwork for about a year, which led to him doing an exhibition in London. It was at that event where a publisher approached him about turning his art into a children’s book. He was reticent about the idea at first, figuring it wouldn’t sell in high numbers because there was no real substance to the story. It was all a show of hand-wavy, abstract concepts like kindness and belonging and vulnerability. Not exactly attributes of real page-turning bestsellers. To Mackesy’s delight, the book has exceeded his expectations beyond his wildest dreams. To date, it has been translated into over 40 languages, with Mackesy telling me he recently received an advance copy of the Hebrew edition of the book.

Work on the film adaptation began in earnest during the height of the pandemic, when filmmakers approached Mackesy about making a movie. Mackesy never dreamed about something like writing a book, let alone make a film based on one. He spent countless hours in Zoom meetings helping to bring the book to life. Mackesy is given executive producer and director credits in the film, which is produced by NoneMore Productions and JJ Abrams’ Bad Robot Productions in partnership with the BBC. The film features work from Tom Hollander, Idris Elba, Gabriel Byrne, and newcomer Jude Coward Nicoll lending his voice to The Boy.

However adamant about the book’s central thesis not revolving around mental health alone, Mackesy acknowledges its importance especially to a Western culture where poor mental health has historically been seen as a weakness and a character flaw. It’s long overdue, he told me, that society has shifted in the direction of embracing mental health for the bonafide medical concern it is. This is due in large part to the isolation brought on by the pandemic. If Mackesy’s tale can help foster more of a positive attitude in this regard, in addition to the other themes, then he’s all for it. For Mackesy, success of the book isn’t measured in sales numbers or Nielsen ratings; to him, success is defined by the emails and letters he gets from readers who tell him how his work has helped them.

The sentiment that Mackesy measures his book’s successes by the way it’s helped others ties in well with his long-term hopes and dreams. He hopes people will go into reading the book and/or watching the film and come out the other side a changed person. A better person. A better-feeling person, even incrementally so.

“I just genuinely hope that people feel a bit relieved. A bit more peaceful. A bit more comfortable in their own skin. A bit more understood. A bit kinder. All these things that [ultimately] make us happier,” Mackesy said of his hopeful impact. “I hope you start at the beginning, and by the time the end comes, it’s made you think in good ways about yourself. It hopefully makes people feel connected or gives them courage to tell the truth and ask for help or whatever it might be.”