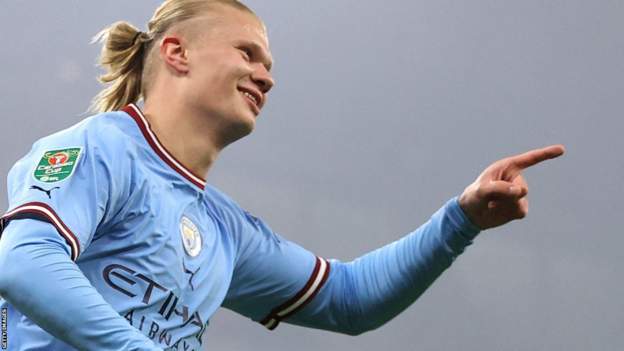 City led three times and, on the first two occasions, they were pegged back. On the second occasion, it took Mohamed Salah only one minute to restore parity after Riyad Mahrez had cut inside off Rodri’s brilliant crossfield pass and found the bottom corner.

But, just as he had done for Erling Haaland’s opener – and 24th goal of the season – Kevin de Bruyne delivered a superb far-post cross after 58 minutes, which dropped just over Nat Phillips’ head and perfectly for Ake, who nodded home.

City deserved their win, keeping Pep Guardiola on track for his fifth triumph in this competition, which would make him the most successful manager in its history.

The reigning Premier League champions will visit Southampton in the last eight during the week beginning January 9, 2023.

However, Liverpool – for whom Fabio Carvalho had scored a first equalizer midway through the first half – had their chances, with Darwin Nunez shooting three times across the face of the goal and wide of the far post when he was positioned to do much better.

Nunez did set up Salah for his goal when he completely outpaced Aymeric Laporte, but there was no third response from the visitors, whose defense of the trophy is at an end.

Haaland back with a bang

The fear for City’s rivals building up to the World Cup was that a fully rested Haaland – his country Norway did not qualify for the World Cup – could cause huge damage when the season resumed.

He could have scored within 20 seconds but, after his pace took him away from the Liverpool defense, the 22-year-old sent his effort sailing over both Caoimhin Kelleher and the visitors’ goal.

But Haaland did not have to wait long to score. The surprise was, having set him up for the opener, that De Bruyne then chose to ignore the striker when City countered late in the opening period and instead teed up Ilkay Gundogan, who could not beat Kelleher when he really should have done.

After doing quite a bit of chasing and harrying for little reward after the interval, Guardiola replaced Haaland with Phil Foden 17 minutes before full-time.

In the build-up to the game, Guardiola said he thought the players who have been in Qatar – and City had more than any other Premier League club – would be in better shape than those who missed out because they have been training with intensity.

There is merit in Guardiola’s view but as City look to get their Premier League campaign back on track over the holiday period, the suspicion would be that three games in a week will suit Haaland better than many of those who have spent the past month trying to win the World Cup.

Respective chief executives Ferran Soriano and Billy Hogan sent letters out to fans in the build-up to the game urging calm after the flashpoints that have scarred matches between the northwest heavyweights over the past few years.

One pair of supporters did not heed the message as they engaged in a furious row after one took exception to the other standing up in a corporate area to cheer Liverpool’s first equalizer through Carvalho.

Like Liverpool as a whole, Carvalho’s season never really got going before the World Cup and his half-time exit does not hint at an immediate upturn in fortunes for the former Fulham man, who had scored for the first time since August.

His replacement, Alex Oxlade-Chamberlain, had another injury-ravaged campaign, but the midfielder was pivotal in creating the space that Nunez exploited for Salah’s goal.

The interesting thing now will be how Jurgen Klopp pieces his squad together as, having slipped seven points behind fourth-placed Tottenham in the Premier League, they really need to find form quickly.