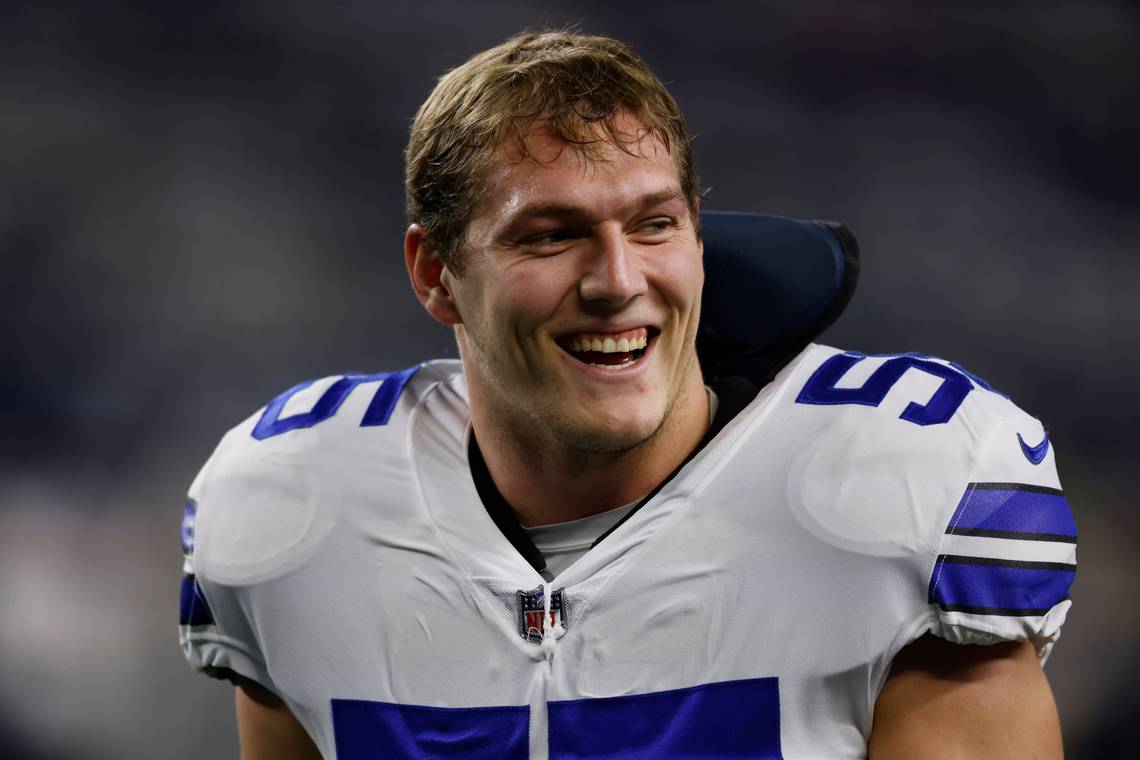 According to the classic children’s song, “The Skeleton Dance,” Leighton Vander Esch should be OK.

Because, according to the lyrics of that famous song“The backbone is connected to the neck bone.”

This is good news, because the Dallas Cowboys linebacker has a history of neck injuries and his latest “situation” isn’t his neck.

LVE was forced to leave the Cowboys’ most recent game on Sunday in Jacksonville with what was originally called a neck injury.

When LVE returned home, he received the good news from an MRI that revealed the injury was a stinger to his right shoulder. Not his neck.

“I heard that BS, too,” a long-time sports orthopedic surgeon told me.

“A stinger is caused by an injury to a nerve root exiting the neck. If it’s caused by compression it’s more proximal and harder to prevent recurrence. If it’s caused by stretch, a ‘cowboy collar’ will reduce recurrence rates and they are usually farther downstream, thus sometimes cover a smaller area.”

“They do not originate in the shoulder,” the doctor said. “They must think that sports writers and other listeners have no interest in checking their facts.”

(Facts can be terribly time consuming).

The team will keep him out for a while, but it sounds as if he will be ready for the playoffs.

The problem for the Cowboys, and specifically for The Wolf Hunter, is that this isn’t a children’s song. This is his life, and the Cowboys 2022 season.

Vander Esch’s situation is one of the ugliest elements to pro sports.

LVE is playing on a one-year contract, in the middle of a “Look At Me” season he needed, and now it’s all uncertain.

Before the injury he looked closer to the player who was named to the Pro Bowl as a rookie.

“I’ve really had people doubt me my whole life. I had a rough couple of years with injuries and it did set me back,” Vander Esch told me after the Cowboys’ win against Chicago on October 30. “I have to give credit to the coaches who trust my ability. I worked so hard in the offseason to show them that I still got this even though I had those injuries.

“This is the system for me. They make it easy for me to do my job.”

In the offseason, Vander Esch made some adjustments to his training. He lost a little weight, and said he felt great.

Before the season began, the Cowboys did not think Vander Esch would hold up. They were right.

The injury area that has bothered him since his days at Boise State refuses to cooperate. There is little reason to believe it ever will.

In 2016, he dealt with a variety of injuries at Boise State that limited him to six games as a redshirt sophomore.

The neck was a concern for NFL teams during the 2018 NFL Draft; the Cowboys took him in the first round with the 19th overall pick.

As a rookie, LVE was outstanding.

Then came the next season.

In 2019 it was a neck injury, which required a “minimally invasive” surgery. He missed seven games.

In 2020, he suffered a broken collarbone. He missed six games.

In 2021, he played all 17 regular season games. Although he had moments in that season where he looked like he should be benched, he was reliable. He also played much better in the final month of the season.

Regardless, the Cowboys had no faith he was going to last.

In May of 2021, the Cowboys declined to exercise the fifth year on his original rookie contract. That would have been a bit more than $9 million.

They instead offered him a one-year deal that could max out at $3 million.

When I asked him about that contract, he took a moment, sighed, and then said, “It’s a business, and I can think what I want to, but it doesn’t matter what I think.” You have to focus on what you can control.

“If I’m worried about what I can’t control, and spend too much energy on it, then it’s not going to turn out well for me. If I can do that, regardless of what I’m getting paid, and play my hardest and do my job well, the rest will take care of itself.”

He was doing everything necessary to land a multi-year deal.

He’s the Cowboys’ leading tackler. When he left Sunday’s game in Jacksonville, the difference was apparent.

The Jags ran for 192 yards en route to more than 500 yards of offense in their overtime win.

The Cowboys don’t have high end performers in the middle of their defensive line to stop the run, which leaves Vander Esch trying to cover.

LVE did everything possible to be an effective player again, and the Cowboys protected themselves thinking it wouldn’t last.

They were both right.