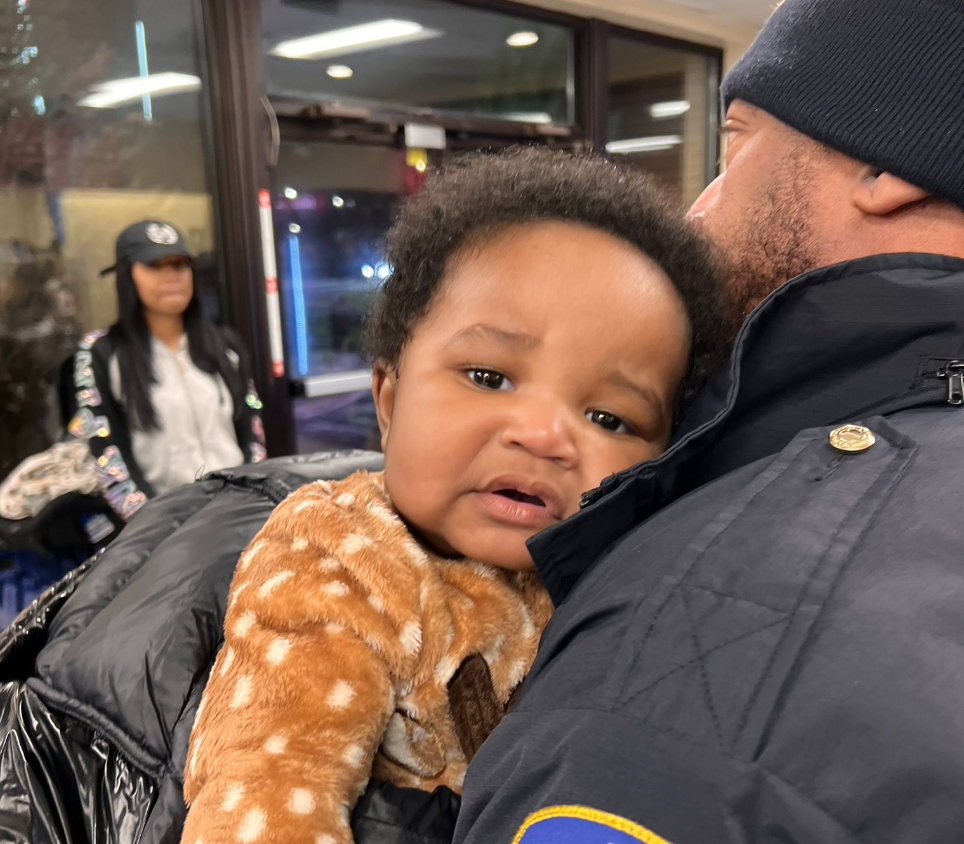 A chance encounter outside of an Indianapolis gas station started a series of events that would lead to the capture of a suspected kidnapper and the discovery of a missing 5-month-old baby, according to the women who helped solve the case.

Indianapolis police have declined to share the details about how investigating officers found baby Kason Thomas, who went missing Monday in Columbus, Ohio, with his twin brother when a woman took their mother’s running car with them in the back seat. The other child, Kyair Thomas, was found by a passerby early Tuesday morning in the parking lot of the Dayton International Airport.

Indianapolis resident Shyann Delmar said she bought toys from a woman who was hanging out at a northwest Indianapolis gas station Tuesday. Delmar then agreed to give the woman a ride to a store.

After dropping the woman off, Delmar shared the story and a video she’d taken of the woman with her cousin, Mecka Curry, and they realized the woman seemed eerily similar to the Columbus, Ohio, kidnapping suspect being shown in the news. Following what they chalked up to motherly intuition and sleuthing, the 27-year-old women followed their instincts about Jackson and decided to take action.

Police radio communications, social media posts and what little authorities have released about the case line up with what Delmar and her cousin told IndyStar.

A toy purchase turns into a mystery

Delmar said she met the woman who called herself “Mae,” bought toys from her and then gave her a ride to a Family Dollar down the street. When the woman started acting erratically, Delmar recorded video of her on her phone.

On Wednesday, Delmar pulled out her video when she saw several mugshots of Nalah T. Jackson, 24, on Facebook that triggered her memory of the strange woman the day before. Delmar compared the images from her phone with the mugshot of Jackson and said she noticed similarities, but didn’t want to jump to conclusions. She asked her family and friends for their input.

“I just wanted to verify it before I got her locked up,” Delmar said.

One of those family members was Curry, and once they were more convinced, they hatched a plan to get “Mae” into the hands of the authorities.

More:Thomas twins’ abduction was atypical in many ways, experts say

Delmar and the woman had exchanged phone numbers during their car ride, and later Wednesday, Delmar said, she got a call from “Mae” about purchasing more items. Unsure what to do with her newfound information, Delmar didn’t immediately answer the call. But on Thursday morning, she called her back about the purchases. They arranged to meet at a residence and Delmar, who was convinced by then that the woman was the suspect on the news, brought Curry with her.

Delmar and Curry said they came up with a plan to take the woman to a store and call the police to arrest her there so they wouldn’t be traced as the people who called her in. First the cousins ​​called Columbus police, who told them to call the Indianapolis Metropolitan Police Department. When they called Indianapolis police, the women struggled to get the point across that they believed Jackson was in their car.

They got frustrated and hung up, and took the woman to several more stores hoping she would shoplift and draw authorities’ attention. They worried taking her to a police station might cause her to run.

Curry said throughout the shopping trips, she made calls to detectives trying to relay all the information she received from her cousin about their belief “Mae” was the suspected kidnapper.

At one point the police were called while the women were in the car, the cousins ​​said. Not wanting to tip off the woman, Curry said she pretended to be talking to a friend and indicated they were driving on I-65 south. The women said the police found their car and conducted a traffic stop. “Mae” at that point went quiet, the women said. Curry said a police officer initially seemed skeptical about whether it was Jackson, and said they should take her to a shelter.

Curry said she showed police a screenshot of Jackson’s mugshot and after comparing the woman in the car, the officer decided she did in fact appear to be Jackson and took her into custody about 2 pm Thursday.

“At that point, that was a relief,” Curry said.

The cousins’ actions leading to the traffic stop were commended by detectives in Columbus investigating the case.

“You guys did fantastic,” the detective wrote in an email, reviewed by IndyStar, that Curry received at 3:33 pm Thursday. “Because of your help we are so much closer to finding that baby.”

Nearly two hours before police announced Jackson’s arrest, Curry posted to Facebook: SHE IS IN CUSTODY AND THE BABY IS NOT FOUND.

Aware that temperatures were about to plunge into subzero territory, the cousins ​​knew they had to turn their attention to finding the baby. In the back seat they found their first clue: “Mae” had left behind a bus schedule.

Since the stolen Honda that Jackson is accused of driving was also missing, they decided to trace the bus route and look for vehicles covered in snow that would indicate the car hadn’t moved in a while. At that point, a dangerous winter storm was on the brink of reaching Indianapolis and snow had started falling.

The first stop was 16th Street and then they drove to a shopping center in Speedway and checked out several cars there without success.

The women were about to give up, they said, and were getting hungry. They saw a Papa John’s on Indiana Avenue and were thinking about getting food when they saw a Honda in a parking lot covered in snow.

Curry said she ran to the car and saw baby legs in the back seat and the baby’s face in the rear-view mirror, and her heart began racing, knowing this had to be the vehicle. The back car door was locked, and she feared the worst after hearing no sound. Delmar said she saw a couple of officers inside a nearby Blaze Pizza and rushed to tell them about the baby.

“We’ve been alerted that the missing child may be located over here at the vehicle at 10th and Indiana,” an officer is heard saying at about 6:40 pm in police radio communications.

Seconds later, “We have custody of the child that’s missing.”

As officers were relaying the information to dispatchers, women can be heard in the background screaming with relief.

Indianapolis police announced on Twitter at 9:24 pm Thursday the child had been found. Accompanying the tweet was a photo of Sgt. Shawn Anderson holding baby Kason inside a Papa Johns.

Delmar can be seen in the background.