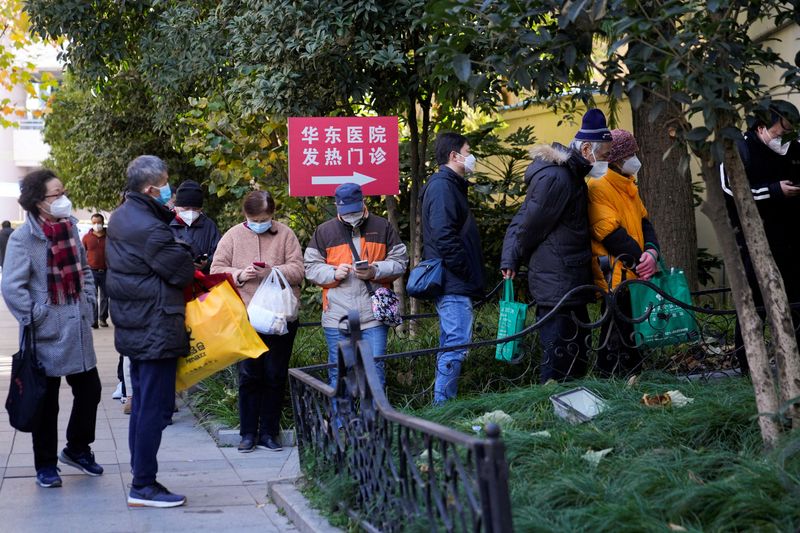 By Farah Master and David Stanway

HONG KONG/SHANGHAI (Reuters) – At the public hospital in Shanghai where Nora, a 30-year-old doctor, works, tension has spiraled since China relaxed its stringent zero-COVID policy on Dec. 7.

Patients quarrel with doctors to access drugs that are in short supply, like cough medicines and pain killers. Medics are overloaded; infected staff continue to work because of a shortage of personnel.

“The policy of controlling covid was relaxed very suddenly,” said Nora, who would not give her full name because of the issue’s sensitivity. “The hospitals should have been notified in advance to make adequate preparations.”

After years of enforcing harsh measures to stamp out the coronavirus, President Xi Jinping’s abrupt abandonment of zero-COVID in the face of protests and a widening outbreak has left China scrambling to avert a collapse of its public health system.

Shortages of drugs and testing kits and logistical disruptions are upending daily life. Four hospital workers told Reuters that insufficient planning for the end of zero-COVID had left them to manage a chaotic reopening.

“I think China thought that its policy was successful and that a gradual transition to the endemic phase was feasible, but obviously it was not,” said Kenji Shibuya, a former senior adviser to the World Health Organization.

More than a dozen global health experts, epidemiologists, residents and political analysts interviewed by Reuters identified the failure to vaccinate the elderly and communicate an exit strategy to the public, as well as excessive focus on eliminating the virus, as causes of the strain on China’s medical infrastructure.

The country spent big on quarantine and testing facilities over the past three years rather than bolstering hospitals and clinics and training medical staff, these people said.

“There is no transition time for the medical system to prepare for this,” said Zuofeng Zhang, professor of epidemiology at the University of California, Los Angeles. “If they could spend a small portion of resources (used) in COVID-19 testing and lockdown, China would be better off in this policy change.”

China’s National Health Commission did not respond to requests for comment on the resilience of the health system and supply of medical staff; whether there were contingency plans to cope with soaring hospital admissions; and whether strict coronavirus measures had impeded improvements to medical capacity.

State media has defended Beijing’s approach while recasting its messaging to emphasize the Omicron variant’s milder nature. In a review of China’s COVID-19 responses, the official Xinhua news agency said on Dec. 9 that Xi had “done right” by taking “resolute actions to curb the virus’ spreading”.

As the outbreak grows, official data on severe cases and mortality rates are unlikely to reflect the situation, experts including Mike Ryan, WHO’s emergencies director, have said. In Beijing, funeral homes and crematoriums are struggling to meet demand.

The National Health Commission has reported only a handful of COVID-related deaths since the reopening, taking China’s official pandemic total to 5,241 deaths, very low by global standards.

Meanwhile, a drive to vaccinate the elderly that began three weeks ago has yet to bear fruit. China’s overall vaccination rate is above 90% but the rate for adults who have had booster shots drops to 57.9%, and to 42.3% for people aged 80 and older, according to government data.

China has declined to roll out Western-made mRNA vaccines, which studies show are more effective than its homegrown shots. The failure to boost vaccination rates among the vulnerable could imperil China’s health system, more than a dozen experts said.

“As we have seen in Hong Kong, unvaccinated older people are at particularly high risk of death and perhaps healthcare capacity in China will be overwhelmed by caseload demand soon,” said Hiroshi Nishiura, a member of Japan’s COVID task force.

Discontent over China’s frequent lockdowns and tough pandemic curbs reached a tipping point in November as protests erupted nationwide. Within days, Beijing announced a sudden relaxation of its zero-COVID rules.

Smaller protests have occurred at medical schools since then, with some students who work on the front lines demanding better protection and medical supplies. The death of a 23-year-old medical student in Chengdu on Dec. 14 fueled public anger at the strain on China’s health system.

“We’re the bottom of the food chain at the hospital,” said a 26-year-old medical student in northern China, who would not give her name nor identify her university for fear of official retribution. “If we’re on the front lines, we don’t have enough protection for ourselves: we’ve even been asked to reuse face masks.”

China’s zero-COVID quest exacerbated pressure on hospitals and medical staff due to the centralized medical system, with people required to be hospitalized even if they had mild symptoms. The government only started allowing home quarantine on Dec. 7.

While China’s Center for Disease Control and Prevention continuously warned that a large-scale outbreak would have a devastating impact on the health system, the fixation on stamping out the virus strained medical resources.

Some experts like Hong Xiao, researcher at the Fred Hutchinson Cancer Research Center in Seattle, said zero-COVID had proved costly and dangerous to public health, diverting funds and medical staff to the pandemic front line and preventing patients with other conditions from getting treatment.

Other researchers say the current threat to China’s health care system has been exaggerated.

Chen Jiming, a researcher at China’s Foshan University, said there was every chance that China’s medical system could cope now that the country has ended quarantine for asymptomatic and mild cases.

“I do think, now, that China can well mitigate the looming tsunami of COVID-19,” he said. “Sure, the medical systems are under great pressure these days, but I think the government can manage it.”

Still, China’s investment in medical resources such as hospital beds and the growth rate of medical staff slowed during the pandemic, official data show. While overall health spending inched up from 2019 to 2021, it dropped slightly as a share of GDP for the first time in more than six years, to 6.5% last year versus 7.1% in 2020 and 6.6% in 2019.

It is unclear how much went to building quarantine facilities or providing tests, but analysts’ estimates gathered by Reuters in May put China’s planned COVID-related spending this year at around $52 billion.

Faced with a surge in infections, authorities have tried to play catch-up. Local government tenders for the purchase of ventilators and patient monitors have soared, according to a Reuters review. There were 423 tenders for ventilators published between Nov. 15 and Dec. 15, up from 283 in the previous period, and 200 before that.

Even as the government has changed its message, urging people to stay home unless they are very sick, patients have been flocking to hospitals and clinics after three years of government propaganda about the dangers of the virus.

In Tianmen, a small city near Wuhan, infected patients have been camped outside clinics as they receive intravenous drips, according to one resident who shared the images with Reuters.

In Hanchuan, in Hubei province, patients sat in their cars to receive IV fluids through vehicle windows, footage on Dec. 14 obtained by Reuters showed.

In some cities, lack of clear guidance on what happens when someone gets infected is adding to the disorder.

At a public hospital in Beijing, a senior doctor said all surgeries had been canceled except in cases where the patient would probably die the next day.

“Up to 80% of doctors in top hospitals in Beijing are infected with the virus but forced to keep working,” he told Reuters on the condition of anonymity because he was not authorized to speak to the media.

Where does China stand on health infrastructure? https://www.reuters.com/graphics/HEALTH-CORONAVIRUS/CHINA-REOPENING/mopakkdqlpa/where-china-stands-on-healthcare-infra.jpg

China had other imperatives for pursuing a strict zero-COVID approach this year, given the threat a large outbreak may have posed to key events. Before the Beijing Winter Olympics in February, the government tightened pandemic controls and state media warned of the dangers of the virus.

Ahead of a Communist Party congress in October where Xi was seeking to cement his rule with a third term, authorities emphasized that there could be no deviating from zero-COVID despite the economic costs and warned of the risks of any reopening.

“Once epidemic prevention and control is relaxed, a large number of people will be infected within a short period of time, a large number of severe cases and deaths will occur, resulting in a run on medical resources,” the People’s Daily, the party’s official newspaper, said in a commentary on Oct. 12 that called for sticking with zero-Covid.

As Xi tightened his grip on power and his focus remained on stamping out the virus at any cost, the leadership did not broadcast any blueprint for how China would move beyond the stultifying restrictions.

When infections began to soar in recent weeks, it became clear that the virus had overrun the zero-Covid defenses.

But Xi’s sudden U-turn meant many companies were unprepared with sick-leave policies or protective gear, while many ordinary Chinese, unaccustomed to treating COVID at home, flooded pharmacies in search of cold and flu medications.

Some cities said workers with mild symptoms can continue to go to work, local media reported, adding to confusion. One Shanghai hospital told its staff this week to prepare for a “tragic battle”.

At least 10 medical experts who spoke to Reuters said they expect infections to peak in the next one to two months, around the Lunar New Year holiday that starts on Jan 21.

A wave of deaths akin to what Hong Kong experienced earlier this year is a “good marker of what might happen” in mainland China, said Keith Neal, emeritus professor of epidemiology of infectious diseases at the University of Nottingham.

“The key challenge will be large numbers of serious infections and deaths in a largely susceptible population because they have not had infection or vaccination,” he said.

The US-based Institute of Health Metrics and Evaluation, part of the University of Washington, last week said it expects more than 1 million deaths through 2023 as a result of the abrupt lifting of China’s COVID restrictions.

At her Shanghai hospital, Nora said new infections are rising, although the hospital does not disclose the data publicly. Medics are worried about infecting patients and relatives.

“The hospital doesn’t have a perfect plan to deal with all the problems and the policy is changing every day,” she said.