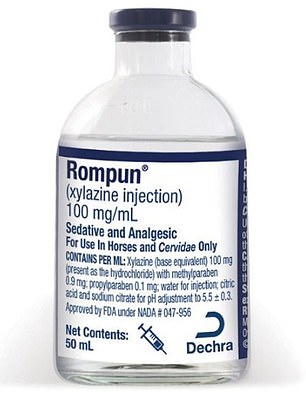 Nearly half of America’s street drugs are laced with a dangerous animal tranquilizer, a study suggests.

More than 40 percent of samples tested in Rhode Island contained xylazine, which health officials say can cause ‘serious and life-threatening side effects’.

Sometimes known as ‘tranq’, xylazine is typically used as a sedative or painkiller for cows and horses in veterinary medicine.

It became popular recreationally in Puerto Rico and started appearing in Philadelphia in the early 2010s, but it has begun cropping up in other places now too.

In November, the Food and Drug Administration (FDA) alerted healthcare workers that the drug was being used as a cutting agent in heroin, meth, cocaine and opioids to boost their effects and stretch supply.

For their analysis, researchers from Brown University analyzed 90 drug samples from the Toxicological and Ethnographic Drug Surveillance Testing program.

Despite none of the drugs being sold as xylazine, forty contained the animal tranquilizer — mostly fentanyl.

Even though the drug is rife in Rhode Island, researchers there say most users and community workers don’t even know what xylazine is.

The FDA has warned healthcare workers that it can be ‘difficult to distinguish’ a xylazine overdose from an opioid overdose — both drugs cause the lungs to start failing.

But unlike opioids, xylazine overdoses cannot be curtailed with naloxone, the emergency opioid overdose reversal drug. Another concern is that people can also become physically dependent on the drug.

This creates complications for addicts who want to start using a medication to treat opioid use disorder, like methadone.

When someone stops using fentanyl as part of that process, they would also suffer xylazine withdrawals.

Patients who abuse drugs contaminated with xylazine can also suffer ulcers and wounds which ‘take a long time to heal, Chelsea Shover, an assistant professor at the University of California, Los Angeles, told ABC.

Xylazine has been involved in up to 20 percent of overdose deaths in the worst-affected states in the past year, including Massachusetts, Connecticut, Illinois, and Pennsylvania.

Sold under the brand name Rompun in the US, it first rose in popularity in Puerto Rico in the 2000s where it is known as ‘anestecia de caballo’.

It has become a common heroin adulterant, a cheap way for drug dealers to improve uptake of the drug and enhance its potency.

In Puerto Rico, xylazine has been most prevalent in a drug combination nicknamed the ‘speedball’, which is comprised of heroin and cocaine and is used to balance the effects of both the downer and the upper.

A 2008 study found that more than 90 percent of syringes used for speedballs tested from Puerto Rico were found to contain xylazine.

Public health officials there were tipped off in part due to the appearance of ulcers on users’ skin where they injected the drug.

The painful lesions are often made worse when users inject the same spot repeatedly, hoping to benefit from the opioid’s analgesic effect.

The drug has left a stain on Philadelphia, home to the largest open-air narcotics market for heroin on the East Coast.

Between 2010 and 2015, xylazine was detected in 40 of Philly’s 1,854 unintentional overdose deaths (just two percent) with heroin and/or fentanyl detections.

The presence of xylazine in Philadelphia has spiked since then.

In 2020, xylazine was present in nearly 26 percent of overdose deaths in Philadelphia, followed by about 19 percent in Maryland and 10 percent in Connecticut.

Xylazine is a non-opioid agent that FDA originally approved in 1972 as a sedative and analgesic for use in veterinary medicine.

The drug acts as a central alpha-2-adrenergic receptor agonist in the brainstem, causing a rapid decrease in the release of norepinephrine and dopamine in the central nervous system (CNS).

Xylazine may also bind to other CNS receptors, although further research is needed.

Xylazine is not approved for use in humans.

Overdoses may appear similar to that of opioids, making it difficult to distinguish.

But unlike opioids, xylazine overdoses cannot be curtailed with naloxone, the emergency opioid overdose reversal drug.

Repeated exposure to xylazine, by injection, has been associated with severe, necrotic skin ulcerations that are distinctly different from other soft-tissue infections (eg, cellulitis, abscesses) often associated with injection drug use.

These ulcerations may develop in areas of the body away from the site of injection.