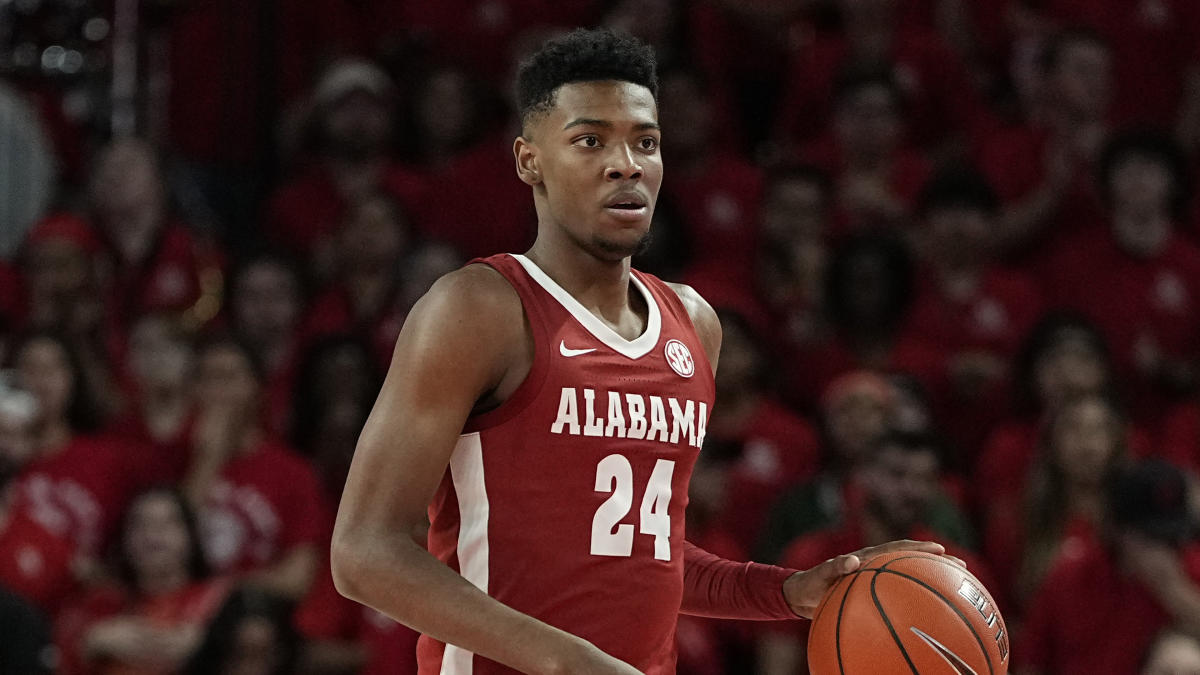 LAS VEGAS — The top two spots are likely to remain the same leading up to the 2023 NBA draft, with 7-foot-4 French center Victor Wembanyama as the favored No. 1 pick and G League Ignite point guard Scoot Henderson taking the No. 2 slot. Where it starts to get interesting is at No. 3 with a handful of options. Alabama’s Brandon Miller is one of the best shooting wings in college hoops. Overtime Elite’s Amen Thompson and Arkansas’ Nick Smith Jr. are two of the best guards in the country. Villanova’s Cam Whitmore has returned from a preseason thumb injury and is settling in well heading into conference play. He has been high on NBA draft boards since the summer.

There will be plenty of movement throughout the college season and into the draft on June 22. Here’s the latest look at the 2023 NBA draft and Yahoo Sports’ projections for the first round.

Cade Cunningham is out for the rest of the season, undergoing shin surgery, giving Jaden Ivey and Killian Hayes room for development. The Pistons currently have the worst record in the NBA at 8-26 and would love to add Wembanyama alongside Cunningham and Ivey next season. The French phenom is currently averaging 22.6 points, nine rebounds and three blocks per game in the and is dominating the Betclic Elite league as one of the youngest players on the court.

Henderson has been sidelined with a nose fracture and concussion for over a month and is planning on returning to the court soon. “I’m just taking my time and getting my rhythm back to get back on the court,” Henderson told Yahoo Sports. Prior to being sidelined, Henderson was averaging 21.2 points, 5.8 assists and 4.5 rebounds per game. One of his most impressive outings was in a win over Santa Cruz where he recorded a career-high 16 assists and added 18 points and six rebounds in 35 minutes.

Miller recently scored 36 points, including six 3-pointers, in a close loss to Gonzaga. It’s the most points scored by any freshman this season. Miller is currently averaging 19.3 points per game, shooting 44% from deep. His size and skill set at the wing position make him an intriguing prospect within the top five.

Thompson is averaging 27 points per 40 minutes and had his best game on Dec. 9 where he posted 23 points and eight assists. Amen is the better playmaker out of the twin brothers, and both players are working on developing their outside jumper prior to entering the league next year.

“Both Ausar and I know we’re not going to be able to get to the rim easily in the league, so we’ve been very intentional this last year working on our floater, working on our pull-up jumper off the dribble, getting more comfortable in those areas,” Amen told Yahoo Sports. “I try to implement it in game situations too just to develop that habit.”

Smith Jr. has been sidelined indefinitely with right knee management after missing the first six games of the season with a minor injury. Smith Jr. has done enough to shut it down, with scouts getting a solid look at the 6-foot-5 guard during high school all-star games and preseason play. Smith Jr. averaged 19.6 points in three games returning to the court and is a solid guard, particularly off the pick-and-roll option, making the right read whether that’s the extra pass, a floater in the lane or taking the 3-point jumper if his man goes under the screen.

Thompson plays with incredible pace and is one of the best defenders in this draft class with his athleticism and timing on blocked shots. He’s averaging 17.2 points, 7.8 rebounds and 5.2 assists per game in the Overtime Elite league. While his twin brother, Amen, is more comfortable as a primary ball handler, Ausar is just as effective off the wing. “Amen is more on-ball, ball-dominant, like a point and I’m more comfortable coming off the wing,” Ausar told Yahoo Sports. “I can run the point, but I feel like I can create more for myself and teammates off the wing.”

Whitmore had his best game of the season so far in a win over Penn where he posted 21 points and grabbed six rebounds in 24 minutes. The 6-foot-7 guard is a prolific scorer with great size who helped lead Team USA to a gold medal in the FIBA ​​U18 Americas Championship this past summer. He’s finding his rhythm after returning from a thumb injury and is one of the best guards in the Big East.

Mitchell’s production off the block has been limited at Texas with the shooters the Longhorns have on the perimeter and has yet to attempt a 3-point field goal this season. Mitchell is a high-level rebounder, particularly on the offensive side of the glass and is a raw, athletic player who has a ton of upside as an NBA prospect.

Walker has the most NBA-ready body in this draft class and is a versatile big who can step out and play on the wing or drop down in the post in a small-ball lineup. Teams in the lottery will value his size and ability to pass off the pick-and-roll option off the perimeter.

Dick is one of the fastest rising freshmen of the season, averaging 15.4 points in the last five games. Dick is a versatile guard who can be plugged in at any position along the perimeter and is a high-level defender off the pick-and-roll switch, averaging 1.5 steals for the season. His best game was in a win over Indiana where he recorded 20 points, six rebounds and five steals.

George is a three-level scorer who is comfortable shooting from anywhere on the court. His shot selection from deep needs to improve, shooting just 32% from 3-point range, and averaging eight attempts from behind the arc in the last four games. The combo guard has improved his body since the summer, dropping 14 pounds and adding muscle mass heading into the college season.

With Trevon Brazile and Smith Jr. out for the Razorbacks, Black’s touches on offense have significantly increased. The freshman out of Texas has great size and is getting more comfortable with the pace of the college game, averaging 12.5 points and only two turnovers in the last two games.

Wallace is the best on-ball defender in college basketball, forcing 2.5 steals per game this season. The 6-foot-4 guard is getting more comfortable playing off the ball as the secondary ball handler and recently recorded a season-high 27 points and nine assists in a win over Florida A&M.

Howard has great size for a perimeter guard at 6-foot-8. He continues to be consistent from behind the arc, shooting 41% from deep. Howard’s lateral quickness remains an area of ​​improvement, but with his size and skill set at just 19 years old, there’s a lot to like about Juwan Howard’s son as a possible pick in the back of the lottery.