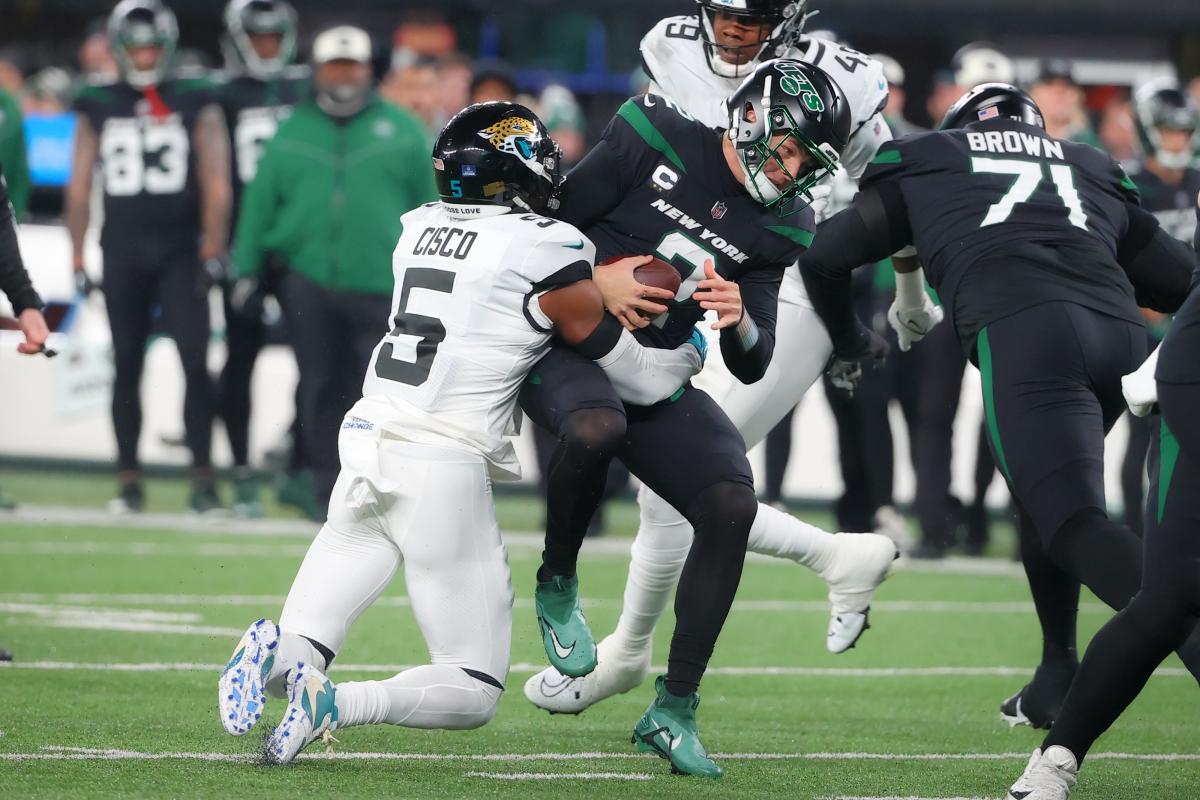 The booing started on the New York Jets‘ fourth play from scrimmage.

Zach Wilson dropped back, the Jacksonville Jaguars sniffed out a screen, and Wilson sidearmed it into the ground. The boos weren’t that loud, but you could easily make them out on the broadcast.

Thursday night’s awful 19-3 loss to the Jaguars might not have been rock bottom for Wilson, because there was that horrendous game against the New England Patriots that got him benched for the first time this season, but it was really bad. Late in the third quarter Wilson was benched for Chris Streveler, a run-first gadget QB. Jets coach Robert Saleh said he put in Streveler to give the offense, and particularly the run game, a spark. He had a couple good plays right away and the Jets stuck with him the rest of the game. The Jets had three first downs at that point. On Streveler’s first drive, the Jets got four first downs.

Wilson is a struggling second-year quarterback, and he’s in the wrong market for it. In 2021 there was some debate about whether Trevor Lawrence or Wilson should be the No. 1 pick — seriously, that happened — and it didn’t seem so bad that the Jets had to settle for Wilson at No. 2. On Thursday night, and many days before that, the two quarterbacks look like they’re not even playing the same sport.

Lawrence looked poised, confident and in control on Thursday night, leading the Jaguars to a huge win over the Jets. That puts them in position to be playing for the AFC South title against the Tennessee Titans in Week 18, if the Titans lose one of their next two or the Jaguars beat the Houston Texans next week.

For the Jets, they’re again left wondering if there’s any hope for a quarterback who was drafted No. 2 overall about 20 months ago.

The Jets had three first downs and 66 yards of offense in the first half. To start the second half, they went three and out.

It was raining and windy at MetLife Stadium, but Lawrence didn’t have much problem with the conditions. Wilson couldn’t make simple throws. Wilson can scramble around and throw it a long way, and that gets some people excited, but he hasn’t shown he can operate within the normal structure of an NFL offense.

Not yet anyway. There’s time for him to develop. Injuries have set him back. But there’s a reason all those Jets fans were booing. There was a reason the Jets were so excited to play for Mike Whitewhen White took over for Wilson a few weeks ago.

White is injured and that’s why Wilson was playing again. The results haven’t been much different for Wilson this time around.

It started on the first series. Lawrence fumbled and the Jets recovered at the Jaguars’ 16-yard line. On third down, Wilson never saw a safety Andre Cisco he blitzed and was sacked. There was no awareness on the play. Maybe that’s being a young quarterback. You’d just like to see more progress by now.

After Wilson was benched Thursday night, you have to wonder if he’ll have any more chances to play this season.

The difference in the Jets offense when Streveler came into the game was unmistakable. Streveler isn’t going to be a regular NFL starting quarterback, but he ran with toughness and purpose. The fans came alive for a bit. The offense had some juice, finally. That probably says more about Wilson than Streveler.

The Jets were in position to draft Lawrence. Then they won two of their last three games in 2020, including a huge upset over the Los Angeles Ramsand Jacksonville suddenly had the first pick.

Just imagine if the Jets had lost out and gotten Lawrence. There are a lot of good pieces in place for the Jets. They had a great draft this season. They were 7-7 coming into Thursday night’s game, still in the playoff race, which was a testament to how good the rest of the roster has been around the quarterback position.

And at home, against a 6-8 Jaguars team, with their playoff future likely at stake, the Jets weren’t even competitive. It was clear early in the game that the Jaguars were going to win. The Jets were putrid on offense, Lawrence looked good enough and the Jets weren’t going to score enough to make it a game. The only time the Jaguars seemed to be in any bit of trouble was Streveler’s first drive.

Not every quarterback needs to be a finished product in his second season. Some players need longer to develop. Wilson is 23 years old with 22 NFL starts. That’s not enough to say for certain he is a bust. But the Jets have to be asking themselves the same question as everyone else: What signs are there that Wilson can become a competent NFL quarterback?